Fort Good Hope is one of the many ancient forts and castles that inhabit the coast of Ghana.

It was built by the Dutch between 1703 and 1705 and served as a trading centre in gold and ivory, and later, slaves. It remains intact to this day, containing a ‘palava hall’ (meeting hall), below ground water storage well, two dungeons, a forecourt with tombs, a tunnel/passage way to the beach and a parapet with light cannon and musketry capacity.

THE PROBLEM: This Fort is not locally and internationally as visible and popular as Cape Coast or Elmina Castles, for example; because the main Accra – Cape Coast Highway bypasses the Fort by a distance of some 20 kilometers. The town of Senya Bereku where it is situated is not known for any special products or large festivals and the closest road that serves it is the small road/ bypass to Winneba that is often not motorable, especially during the rainy season. This means that the Ministry of Tourism and the government agencies under various Ghana governments have not been able to monetize the potentials of the Fort in order for it to pay for its maintenance. 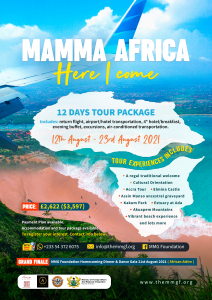